Who are these people?

-And what do they know about historic games?

We began researching and teaching games of the past back in the 1990's as members of Clann Tartan Historical Re-enactment -At the time, probably the largest Scottish "living history" group in North America. Beth didn't want to be just a camp drudge -spending weekend reenac 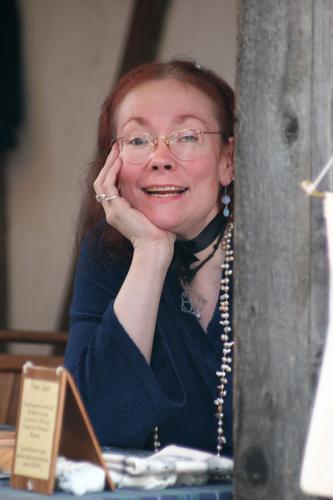 tment events cooking over a fire for 40, to 50 hungry, plaid-covered barbarians. But she didn't know a period craft which she could demonstrate to portray other women's roles of the time.

But, she did play Backgammon and Cribbage, and eventually used her love of the games to create a niche for herself teaching period board games to the public at Clann appearances. I took a wooden box from a gift of wine we received as a wedding present, and painted a Backgammon board on it decorated with Celtic knotwork, and she began to use it as her "toy box" at events. I was working in public libraries at the time which, of course, helped with the research. Over the course of several years, so many people asked if any of the games were for sale, that we decided to design our own boards and began marketing them. We discovered an example of a board game that was printed directly on fabric in the 1790's and we took the idea to create our own line of portable games.

After a couple years we were able to ad our line of historic and modern novelty dice to our wares as well as our own line of period playing cards. Since Clann Tartan's original focus was 17th century Scotland, primary focus has remained on games that can be documented in Europe at least as early as 1700.

While we do not claim to be the last word on games from the past, we do take pride in our research, and the wide variety of historic and regional rules we include. We are happy to answer historical questions whenever we can, or refer people to other sources for research help.

We've been in business since 1994 and acquired a booth at the Minnesota Renaissance Festival in 1995. We now appear at a number of events in the 5-state area around our base in Minneapolis selling our game as well as my larger pieces of Celtic art.

Since our first website went on-line in 1997 our games and period playing cards have attracted historical reenactors around the world from members of the Sealed Knot Society of Great Britain, to Australia's Pike & Shot Society of New South Wales. In recent years our playing cards have been used as props in a number of historic themed movies and TV shows.

We are looking for people interested in selling our products at events that are out of our range of the Midwest. Please feel free to contact us for wholesale information.