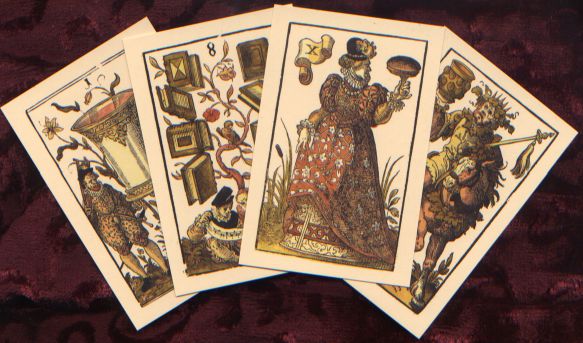 Dating to 1588 this 52-card deck is based on one of the most significant works of Jost Amman, one of the more prolific artists of the German Renaissance. German printers experimented with a wide range of suit symbols, this deck uses Books, Jars, Printers' Ink Pads and Cups. (See the video below for a closer look a the deck) As was common in German cards, there are no jacks and queens, but rather the German equivalents of an “unter” (“under” with the suit sign at the bottom of the card), an Ober (“over” with the suit sign at the top of the card) and kings on horseback. It also features a female figure as the 10 of each suit. The backs are blank as was most common on early cards. They are about 3.5 " x 2.25" the size of a modern "Bridge deck," and printed on uncoated card stock for a historic look and feel. They are blank on the backs as was most common for early cards.


Order 4 decks and we include our booklet of early card games!

Learn more about the symbolism of this deck: