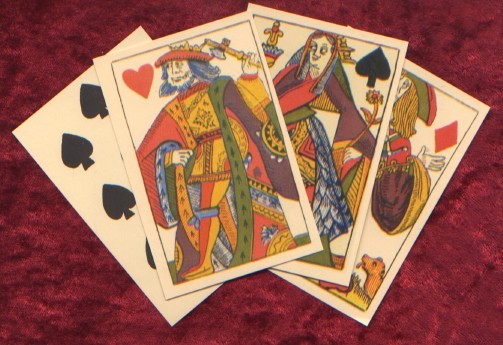 This is a reproduction of a deck dated to 1567 that is based on a set of face cards by Pierre Marechal of Rouen, France. (See the video below for a closer look a the deck) The cards of Rouen are significant because many were produced for export to Britain. English merchants are even said to have bought them for re-export to other countries. In 1628 England banned the importation of cards, and English printers have been shown to have used Rouen face cards as inspiration for their own cruder, more stylized decks which have become the standard motifs still used in many modern decks. They are about 3.5 " x 2.25" the size of a modern "Bridge deck" and they are blank on the back as was most common for early cards.

Order 4 decks and we include our booklet of early card games!
$5.00 each + shipping

Watch the scene and learn more about this deck